• Introducing a Dog to Other Pets

• How to Stop Barking 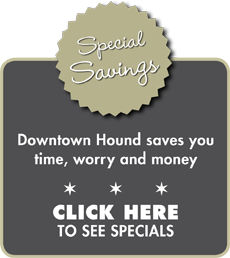 Dogs with separation anxiety exhibit distress and behavior problems when they’re left alone. The most common behaviors include:

* Digging and scratching at doors or windows in an attempt to reunite with their owners
* Destructive chewing
* Howling, barking, and whining
* Urination and defecation (even with otherwise housetrained dogs)

Is it separation anxiety?

If most, or all, of the following statements are true about your dog, he may have a separation anxiety problem:

* The behavior occurs primarily when he’s left alone and typically begins soon after you leave.
* He follows you from room to room whenever you’re home.
* He displays effusive, frantic greeting behaviors.
* The behavior occurs whether he’s left alone for short or long periods.
* He reacts with excitement, depression, or anxiety to your preparations to leave the house.

Help save a life: Pledge to adopt your next pet

It’s not fully understood why some dogs suffer from separation anxiety and others don’t. But it’s important to realize that the destruction and house soiling that often occur with separation anxiety are part of a panic response. Your dog isn’t trying to punish you for leaving him alone.

Following are some common scenarios that can trigger separation anxiety:

* A dog accustomed to constant human companionship is left alone for the first time.
* A dog suffers a traumatic event (from his viewpoint), such as time at a shelter or boarding kennel.
* There’s a change in the family’s routine or structure or the loss of a family member or other pet.

How to treat minor separation anxiety

* Don’t make a big deal out of arrivals and departures. For example, when you arrive home, ignore your dog for the first few minutes then calmly pet him.

Leave your dog with an article of clothing that smells like you, such as an old T-shirt that you’ve slept in recently.

* Establish a safety cue—a word or action that you use every time you leave that tells your dog you’ll be back.
* Consider using an over-the-counter calming product that may reduce fearfulness in dogs.

How to handle a more severe problem

Use the techniques outlined above along with desensitization training. Teach your dog the sit-stay and down-stay commands using positive reinforcement. This training will help him learn that he can remain calmly and happily in one place while you go to another room.

Create a “safe place” to limit your dog’s ability to be destructive. A safe place should:

* Confine loosely rather than strictly (a room with a window and distractions rather than total isolation)
* Contain busy toys for distraction
* Have dirty laundry to lend a calming olfactory cue or other safety cues.

What to do in the meantime

It can take time for your dog to unlearn his panic response to your departures. To help you and your dog cope in the short term, consider the following interim solutions:

* Ask your veterinarian about drug therapy. A good anti-anxiety drug shouldn’t sedate your dog but simply reduce his overall anxiety.
* Take your dog to a doggie day care facility or kennel when you have to be away.
* Leave your dog with a friend, family member, or neighbor when you’re away.
* Take your dog to work with you, if possible.

* Punishment. Punishment isn’t effective for treating separation anxiety and can make the situation worse. The destruction and house soiling that often occur with separation anxiety aren’t your dog’s revenge for being left alone: they’re part of a panic response.
* Another dog. Getting your dog a companion usually doesn’t help an anxious dog because his anxiety is the result of his separation from you, not just the result of being alone.
* Crating. Your dog will still engage in anxiety responses inside a crate, and he may urinate, defecate, howl, or even injure himself in an attempt to escape. Instead, create other kinds of “safe places” as described above.
* Radio/TV noise. Leaving the radio or television on won’t help (unless the radio or TV is used as a safety cue).
* Obedience training. While formal training is always a good idea, separation anxiety isn’t the result of disobedience or lack of training; therefore, it won’t help this particular issue.

Yes there are plenty out there but some really stand https://pro-academic-writers.com/ out from the rest.

Get the latest tips on training your pet along with valuable savings.

Reserve your pet a spot